Posted by cesikkenga on July 17, 2015 in Feature, News Category 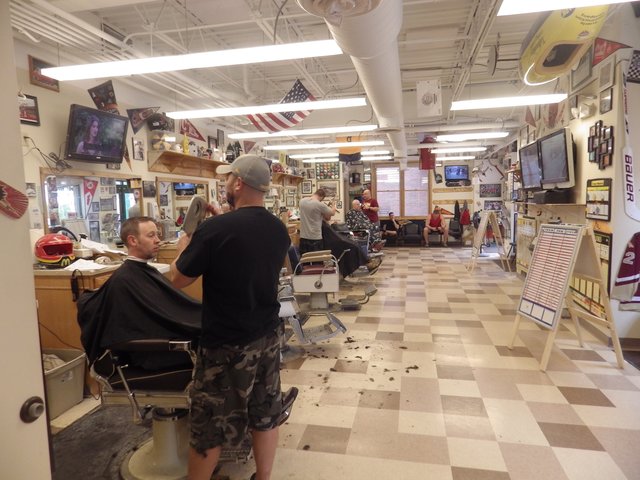 To tour the shop and see some of the highlights of Jason’s collection of sports memorabilia, hover over the photo and click on the green circles.

In the 1980s, the television show Cheers created a template for a workplace comedy.  Set in a bar, it told of a neighborhood establishment where workers and customers forge lifelong relationships in a place where everybody knows your name.

Spend some time at Jason’s Barber Shop in Kent, Ohio and it isn’t tough to imagine a similar story unfolding amidst the clippers, straight razors and hot towels.  In shops like this, tall tales are swapped.  Laughs shared.  Advice dispensed.  In the process, bonds form that can last decades.

Jason Fabick, who owns the six chair shop on the Alley’s upper level along with Jason Manion, said although his business sells haircuts, the connection between cutters and cuttees is maybe more important than the trim.

“It’s about the people and the relationships,” Fabick said. “It’s like we were saying earlier today.  ‘You can BS the mess.’  A good haircut still means a lot, but people like to come in here and have fun.”

A PIECE OF HOME

Part of the fun in Fabick’s shop comes from the decor, a collection of sports memorabilia extensive enough to rival any sports bar.  The jerseys, photos, bobbleheads and other paraphernalia cover nearly every inch of the shop’s walls and shelves–interrupted only by a handful of flat screen TVs tuned to sports programming.

Fabick calls the decision to go with the sports theme a “fluke.”

“My wife said ‘get your crap out of the basement’ and that was it,” Fabick said.  “So I brought it in here and the other Jason says ‘I guess we’re gonna have a sports barbershop.’  He brought his stuff in and from there people have been donating ever since.”

“It’s 30 years of establishing friendships with our customers and people just wanting to have a piece of themselves (in the shop)” said Fabick, pointing out a soapbox derby car donated by a customer’s daughter and a baseball bat and signed ball that another patron brought home from a major league game as child and eventually brought into the shop.  “It’s just people saying I thought I’d donate so I’d have something here.”

Six chairs down from Fabick, Johnny Moore, known to shop regulars as “Johnny the Barber,” also forges these sorts of bonds.  Describing himself as a people person with a gift of gab, he shoots opinions and barbs in the direction of his clients or, more frequently, his colleagues, often stepping from behind his chair to punctuate his point with a variety of facial expressions and enthusiastic arm movements.

That Moore has decorated his entire station with Pittsburgh Steelers memorabilia is a clue to his personality.  The fact that he’s willing to display a veritable shrine to a hated rival in the heart of Browns country is an indicator of the way he enjoys stirring things up.  However, he also displays a knack for relating to customers of all backgrounds .

With older customers, Moore is enthusiastic as if talking to a long lost army buddy.   When explaining the shop’s new booking app to a mother, he’s patient and informative.  When her elementary age child is in his chair he softens his tone, making sure to bend to the youngster’s level.  With the young adult males, he’s louder and the conversation takes on the enthusiastic tones of a locker room or frat house.  No matter who is in the chair or the topic being discussed, the patter comes off as genuine, not generic.

Johnny Moore, known to Jason’s patrons simply as “Johnny the Barber” finishes a cut on July 14. The lone Pittsburgh Steelers fan in shop of Browns loyalists, Moore is frequently the target of friendly barbs from colleagues and customers. (photo by C.E. Sikkenga)

“When you’re talking with somebody, you have to be engaged to the point that you are getting to know them,” Moore said. “That’s how you build the relationship.  So when Leo comes in (he motions to a 20-something man in the waiting chair) I already know what we’re talking about.”

He then proceeds to rattle off enough details about Leo to fill a reasonably solid Wikipedia page.

“He just quit his banking job, he’s getting ready to go get his masters’ degree and that’s all happening over the next few weeks,” said Moore, noting Leo is one of his customers who has been coming in since he was a kid.  “He’s moving up to Cleveland.  He was in here three weeks ago and that’s where we’re we’re gonna pick our conversation up when he sits down.”

A few minutes later, Moore relates the story of a father and son who came for a cut before summer football practice started.  When he reveals the player achieved his goal of making the varsity team as a freshman, his speech slows down and his voice softens leaving little doubt that he was as proud as if he were discussing a family member.

Moore also relishes the fact that long-term customers return, even after they’ve moved out of town. This is particularly true in October, during Kent State’s homecoming when he sees customer’s that date back to the shop’s early days in house in a different part of the city.

“We get soooo many old school customers–back from the days in the house,” Moore said.  “They come in, now they’re married, they have  kids.  We get that all the time.”

This sort of personal touch makes the shop and its barbers a mecca for repeat customers who even become a part of one of the shop’s unique traditions–the yearly fantasy Tour De France competition.

Moore said the tradition grew out of one of the biggest issues the barbers faced in their original location in the house.

A large poster board along the main wall tracks the current standings in Le Tour de Jason’s, the annual fantasy game between Jason’s barbers and clients. (photo by C.E. Sikkenga)

To pass the time between cuts, he said the barbers started watching the Tour during Lance Armstrong’s run to multiple titles.  After Armstrong retired, the barbers found they’d become devotees and what began as friendly banter predicting who would win a post-Lance tour grew into a fantasy league that now includes customers and has a waiting list, entry fees and a host of inside jokes Moore suggests are not necessarily fit for a polite publication.  A trophy commemorating past winners enjoys an honored spot in a corner opposite the shop’s entry, further reinforcing the bond between barbers and customers.

These days, there’s not much down time for the barbers.  The scheduling app ensures most every 20 minute slot is filled for each of the shop’s barbers.

Still, the tour plays on the television with the league standings board on the floor below and although Moore admits he rarely has had enough free time to follow the tour this year, on a recent Tuesday the race was a frequent topic of banter throughout the shop.

In the end, for Fabick, it all comes back to the bonds between the barber and the client, one that isn’t found at chain franchises where barbers turn over frequently, rarely staying long enough that build the sort of relationships he values.

“It creates a stability when you have a relationship like this with these guys,” Fabick said. “They’re here and they’re always here. People get to know them.”