Posted by kereneesparks on July 17, 2015 in Feature, News Category

Within less than a mile of one another in historic downtown Kent three locally owned unique barbershops offer not only services that include cuts and hot shaves, but also a distinct personality to their clientele. The personality behind these local shops keeps customers returning.

Fabic said after his wife told him to “get his crap out of the basement” he thought of no better place to take it than to the shop.

“I guess that’s when we decided we’re gonna have a sports barbershop,” he added.

After adding his own athletic collection to the shop, other barbers brought in personal items that reflected their sport favorites, including Johnny Moore’s, often referred to as Johnny the Barber, Pittsburgh Steelers jerseys, championship banners, and helmets. Regular clients also donated their own athletic memorabilia to add to the shop’s collection. 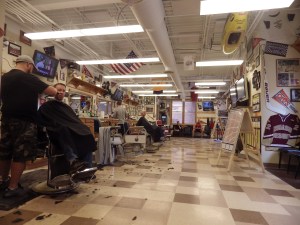 Jason’s Barber Shop is permeated with sports memorabilia from the Cleveland Browns, Ohio State Buckeyes, Pittsburgh Steeler, and other teams as well. Johnny Moore is the lone Steeler fan. (photo by Kelly Sparks)

“Just through years of establishing friendships with our customers and people wanting to have a piece of themselves [in the shop],” Fabick said as he points at a soapbox derby car that belongs to one of his friends’ daughters, “allows people to have something here.”

Slow summer business in the initial stages of the shop opening brought a time lag in customers so the barbers became interested in watching the Tour de France.

When long-time winning Tour de France Champion Lance Armstrong left the tour, the barbers began arguing one day during some down time about who was going to win so they decided to create a fantasy Tour de France team. They are now in their tenth year of competition. The winner receives a trophy located in the corner of their shop and the loser receives “we’re not going to talk about that,” Johnny the Barber said.

The entry fee involves $20 and a case of beer or a bottle of liquor with 12 current members and a waiting list of participants.

The nostalgic atmosphere keeps clients coming back to Jason’s Barber Shop and the convenience of scheduling an appointment on the shop’s new web booking service and free app download, which provide easy access to their services. 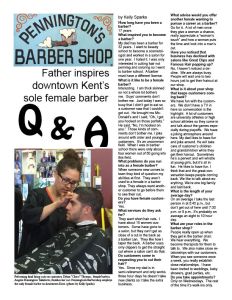 Local Mom Michelle Dockstader, who brings her sons to the shop because her husband has been a long time Kent resident, said that one of her favorite things about Jason’s is she can make an appointment with her son’s favorite barber online because she can see when he is available at a convenient time for her.

“I just dropped one son off at piano lessons and came over here to get my eight year old’s hair cut after making the appointment last night,” she said.

Customers vary in age and barber preference. Some regulars are or have been Kent State students and some just like the cut given. “When I came to school here I looked around for barbershops and heard about this one. I heard this was a really good one so I came here and haven’t been disappointed since,” Ben Even said.

The number of clients at Jason’s Barber Shop has increased to around  3,000 customers.

Around the corner from Jason’s Barber Shop Kent residents will find another local barbershop, one with its own style.

Jazz music plays while walking into Leander’s Barber Shop on 124 E. Main Street. Customers are greeted by the shop’s owner Leander Walker, a tall, deep-voiced African American. “Hello and what’s your name?“ he asks, as the ASNE workshop participants approach him for an interview.

Barber Ed Bankston, employee of Leander’s since 2012, pointed out that the shop is located next to a book shop.

“We want people to come in here and read a book not stare at a TV, which is something you can do at home,” Bankston said.

Ed Bankston, Leander’s barber, explains the different types of clippers and add-ons used for various cuts on his clients. This add-on has a magnet for quick connection to the tool used for efficiency in his line of business. Behind Bankston hangs a poster he ordered after hearing a recitation of it entitled “One Barber”. (photo by Kelly Sparks)

No large screen TV is hanging on the wall as seen in Jason’s. However, a stack of children’s books and magazines line a nearby shelf. “We’re more about conversing in this place. It’s befitting because we are next to a university, an institution of higher learning so it’s slightly different here,” Bankston said.

Gregory Foster, a longtime friend of Leander, visits the shop today ‘just because’. Leander began cutting Foster’s hair when he was six years old. After moving away for several years and returning to Kent, Foster found out that Leander had his own shop and returned to having his hair cut by him. He has had his traditional short hair cut done by all of the barbers.

“They are all great barbers but normally I go to Leander, he’s like a brother to me,” Foster said.

Foster added that sometimes when he is low on money Leander even gives him a free haircut just to help him out.

Bankston said some things that set them apart from other barbershops are the half hour or more service they provide for their customers and preciseness of the cuts. They use an old fashioned straight razor to do line-ups instead of a modern hair clipper.

One quality that Bankston prides himself in is his meticulousness. He said being a barber is a perfect occupation to reveal this trait. “I got a little OCD from the military. In this industry this works beautifully. I want it to look like how I want. So for the barbershop it’s perfect.”

Some people are impatient when the cut takes longer than they want.

“They won’t even wait until I am done exchanging money with one customer and the guy tries to come over in this space and sit down. I’m like whoa, this ain’t McDonald’s like that,” Bankston said.

To keep clients from waiting for sometimes an hour or more Leander’s shop offers appointments only before 10 a.m., but otherwise it’s walk-ins only. “Then it’s first come first serve after 10. It’s so busy then you can’t do appointments because people just end up waiting for hours,” he said. 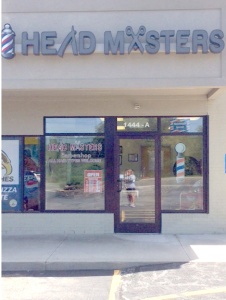 Headmaster’s is owned by Bradley Jefferson. (photo by Kelly Sparks)

Down the block on 1444 Main Street is Headmaster’s Barber Shop with yet another aura welcoming clients.

In an area ranging from 150-200 ft two barber chairs, two wash sinks, a full size couch with an ottoman, a small filled refrigerator, and one 32-year old owner greet clients who want a haircut. “I like my customers to be comfy so I have a big couch in here. I don’t like folding chairs,” owner Bradley Jefferson said.

Jefferson hopes clients will get the feel of walking into a living room so they feel comfortable. He spends a half hour or more on his cuttees and lets them steer the conversation. “Conversation topics range from G-rated to all the way to the other end of the scale,” he said. This time allows him to get to know them on a personal level.

Jefferson is the single barber in this shop currently and wouldn’t mind having another barber, but wants to make sure it is someone who will work. “Because Kent State is only in summer session right now business has been slow,” he added.

These downtown local barbershops offer services for a variety of clientele. While most of the customers are males ranging from two to 84 some female customers venture in from time to time. The popular undercuts hairstyle and eyebrow arches are some of the most common services that women receive.

Kent offers a mixture of barbershops for its customers to stop in for a cut. However, one might receive more than just a cut. “Me and him we just see eye to eye. He just know my style,”Dakari Carter said of Isaiah Bush, Leander’s barber. Downtown Kent customers have a variety of shops to visit for a cut and more.